In preparation for the launch of a new server, our eyes have been focused on the early-game experience. Now that Helion is in full swing, we’re looking back to the mechanics of high end combat.

Players have no shortage of defensive options in Dekaron, with multiple armor slots and options to customize. Compared to a single weapon slot, defenses have been increasing at a faster pace than damage, and fights between well geared characters can feel increasingly drawn out. We’re introducing two features, already implemented on the Korean client, to make high-end combat feel deadlier and more exciting.

The damage cap from critical strikes has been increased from 300% to 400%. You’ll want to hunt for the Vitality stat to increase the damage of critical strikes, which can now hurt more than ever.

The other new damage enhancement can only be obtained from one source for now: glove socket stones. From now on, you’ll be able to add sockets to existing gloves of epic rank only. That means it's limited to Helpyron’s Gloves and Helion’s Gloves for now, including their elite/probationary variants. Adding sockets to your gloves otherwise functions like other items, with the same probabilities and costs.

Specific to gloves are socket stones that grant the new Physical Penetration and Magical Penetration stats. Rather than increasing your damage directly, these stats negate (penetrate) the given amount of the target’s physical or magical damage reduction, by a percentage. This can result in a substantial damage increase against targets with high levels of damage reduction.

You’ll now be able to find Physical and Magical Penetration Stones on powerful bosses inside high-level dungeons. But they shouldn’t be much of a challenge for you, if you’re competing at the level where penetration makes a difference.

​To give everyone a chance at these new stones, we’re also adding them to Trieste’s Gold Treasure Box and Trieste’s Platinum Treasure Box, and moving a few things in the boxes around to accommodate them, including adding Vitality green costume crests to both boxes.

Trieste is still included in the launch event, with experience set to 300% for the next week as well.

​It turned out that the legwork required to unlock the highest level of the Karon Bell Emblem was quite a bit higher than mortal legs could manage. Karon Bell Fragments will no longer drop in Mitera, as last week’s patch notes stated, but they will continue to appear in Arcadia, both Purified and Polluted, at the same rate as last week all the way to May 7th.

Due to popular demand, the Dungeon Drive is also being extended. Secret Stashes (which include Cozy Gifts) will appear from bosses in Ruins of Baz until the 7th of May, as well.

Last week’s changes to the Connection Rewards will remain in effect until May 7th.

And until May 7th, the changes to DK Square will remain in effect – only six players are needed to begin a match, and DK Square is open all hours of the week.

​The New World Package IV is this week’s new DShop addition. It’s a great way to load up on Meister skills for your new characters, with some Ballon d’or 6 for good measure.

Though only one new item is being added, we’re moving around some existing DShop items, and adding some bulk discounts for common purchases.

We All Beginners and New World Packages I-III are now located in the Item -> Premium tab.

You can now purchase the (All Socketed) Pet Lucky Box in discount packs of ten.

Gniar's Secret Document can be purchased in singles, and the 10-pack’s price is being reduced. 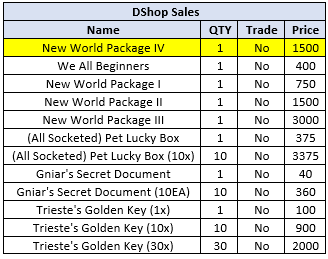 We're thankful to our players who have stuck with us during the successful but rocky launch of our new server.

We've received numerous support tickets regarding lost hours of buffs, due to disconnections and server issues. We're unable to verify everyone individually, so we are instead offering a compensation package to all players who logged in to either server at all, in the first few days after Helion opened:

​Update regarding the Cereal Box/Socket Situation:

On April 2nd, the Tricky Cereal Box, a random box, was added to the DShop. Included in the possible contents were PvP damage resistance incrase [sic] 5% and 6% costume crests. We stated that these prizes were errors on our part, that the intended rewards were belt stones with the same stats (Immortal Reduce 5%/6%), and that the crests would be replaced with the socket stones in a future update. Some players purchased large numbers of these random boxes based on this information.

Unfortunately, the developers have informed us that adding the Immortal Reduce stones to the game’s economy would create an unacceptable imbalance. In addition, the error was on our part rather than theirs, in misinterpreting the patch notes they had provided to us.

Though the developers' judgement was that all sales are final, we emphatically stated that we had promised the items to our players, and made the case for the importance of good will and trust. The discussion has lasted quite a while, which is why it’s been so long since we've updated players on the situation.

We have finally reached an agreement with the developers that will compensate players for the items in question, as follows:

Players who received the PvP damage resistance incrase 5% from the Tricky Cereal Box will receive the following box, one for each crest they possess:

Players who received the PvP damage resistance incrase 6% from the Tricky Cereal Box will receive the following two boxes, one of each for each crest they possess:

If your crest was not replaced, or you have any questions, concerns, or feedback about this decision, please submit a support ticket. 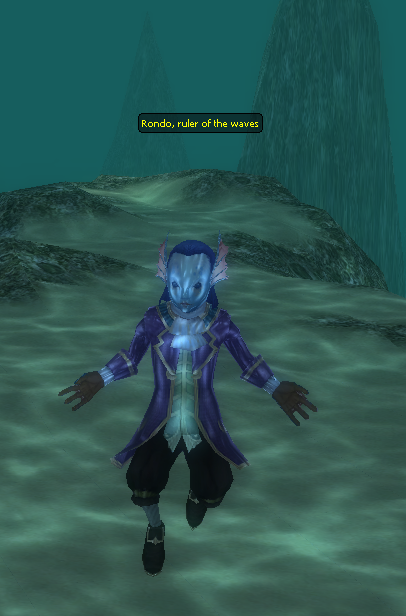 ​Take care, and see you in-game!