Both Treasure Boxes contain some choice new items this week. And you can take advantage of bulk savings on keys (SAVE 750 DKC), too. Read more about what's happening in this week's patch notes.

The Kirin of the Ninth Sky has galloped its way from the Platinum box to Trieste's Gold Treasure Box, and its odds of showing up are much better too. You can also find crafting materials for Helion's Armor, and more. 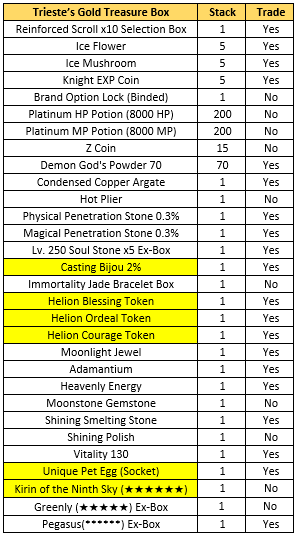 The Unique Corrupted Dracorich has flapped from Gold back to Trieste's Platinum Treasure Box, but will appear more often. Spirit 10% Socket Stone Choice Box lets you select your choice of elemental weapon stone with 10% increased attack, and boosts to Spirit and Health. The powerful Guardian's Wings have returned, too. 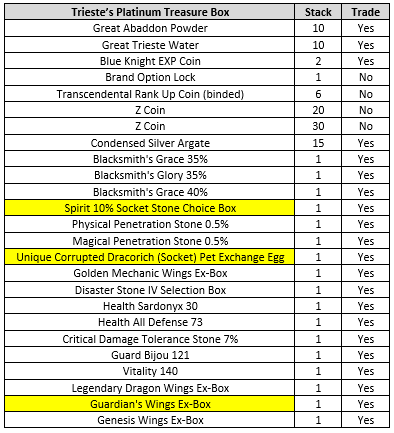 The Sign of the Nexus is shining over the DShop. The Nexus Lucky Box can contain materials for the creation or exchange of all three levels of Nexus Helm, or even a complete helmet. You might also receive Helpyron’s Belt or Bracelet, which provide a set bonus with the Third Nexus Helm when both are reinforced to +7 or higher. And since the helms and their ingredients are mostly tradable, it can pay off to take advantage of the volume discount.

As a reminder, Mana Crystalline and Dimension Energy can be taken to Worshipper’s Shelter for purposes of exchanging and/or upgrading the first- and second-tier Nexus Helms.

Trieste’s Golden Keys are available for a bulk discount, too. 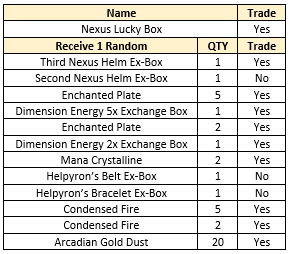