Our update this week brings some changes to various skills and formulations across most classes. Class balance is an ongoing process that accounts for power curves, gear progression, and meta-strategies, and these changes are intended to address outliers among over- and under-performing abilities.

Many skills have had their mechanics changed, in order to address feedback that they were too powerful or cumbersome, or otherwise not functioning as effectively as intended. Some of the changes affect all levels of the skill, but the tables will only give the value at the skill’s maximum level.

In addition to the numerical changes, the tooltips for a few skills and buffs have been altered to increase readability and to provide more information on their numerical effects. We’re hoping to update even more tooltips going forward, to give players a better idea of what benefits they can expect from their hard-earned skill points.

Due to these changes, all characters are receiving a complementary skill and stat reset (which will not affect your Meister skills or title).

The Aloken is widely considered a defensive powerhouse with damage that lags behind, despite not being intended as a “tank”-type class. To correct this, its primary defensive skill, La Defense, is having its damage reduction lowered slightly, and a melee attack power bonus is being added to compensate.

Divine Cure is a very potent self-heal, so it has had its duration and healing amount decreased, and its cool time increased.

C’est La Vie is being made more convenient, with its duration (and refresh delay) both being increased by 50%. A small additional increase to the attack power of the Aloken who casts it has been added, too.

Half Bagi benefit from a smattering of small boosts to their skills.

Blow of Fury’s damage portion has not changed, but it now grants up to 5% reduction to PVP and PVE damage. The buff portion now lasts for 15 seconds, though the skill’s cool time has increased as well.

Fury Blast does not need to be refreshed as often, thanks to an increased duration.

Lethal Cutter is much more lethal, striking 5 times instead of 3.

While the Seguriper is meant to be a damage machine, the Explode skill was a little too excessive given the power of comparable skills, and has had its damage lowered by about 8%.

Tizen Storm (aka Tigen Storm) has not had any mechanical changes, but its visual effect is less pronounced, so it won’t obscure your view as much.

Both Summoner classes have probably had enough of their pets and Chakras being one-shot, so HP has been multiplied by two for Meister skill pets, and by four for Chakras. Both Meister pets now receive 75% damage reduction against melee and ranged attacks, too.

The damage for most of the Vicious Summoner’s Control skills, which inflict magic poison damage, has been increased in PVP combat by about 5%.

Most of the Conserra Summoner’s Shadow Krieger skills, which deal physical and poison melee damage, now do about 6-7% more damage in PVP combat. 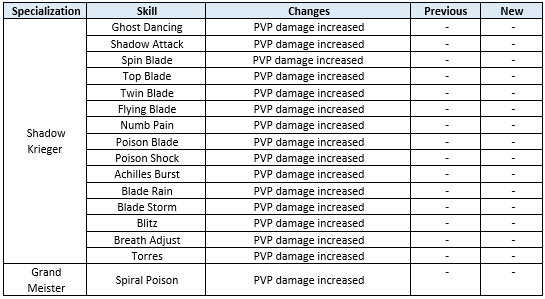 While the Dragon Knight possesses many powerful buff skills, their short durations make them more of a liability in battle.

As such, the Preventer and Obortan (and Obortan’s Rage version) have had their durations increased, but their cool times have increased proportionately.

Health Regain has had its benefits concentrated into a shorter window, with a net increase in overall healing.

The Dragon Knight was falling behind offensively, so almost all of their damaging abilities now deal about 11-12% more damage in PVP. 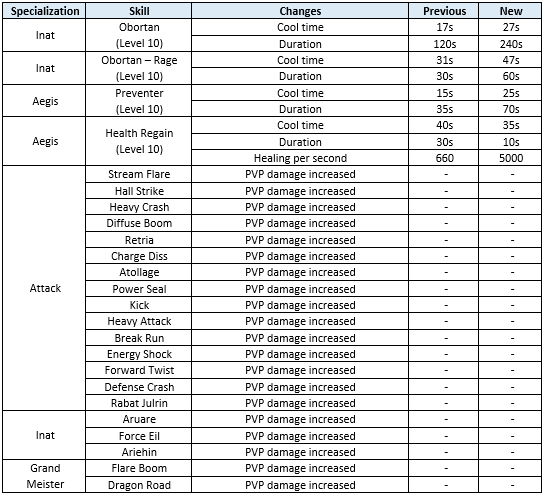 The Divide Pain/Force skills have had their buff effect durations increased. This refers to the stat bonuses that the Bagi receives when damage is transferred, not the overall duration.

Separate, one of the highest-level skills in the Militancy skill tree, now deals AoE damage on all four of its hits, instead of just the last two.

Most of the Bagi’s attacks now deal about 8% more damage in PVP. 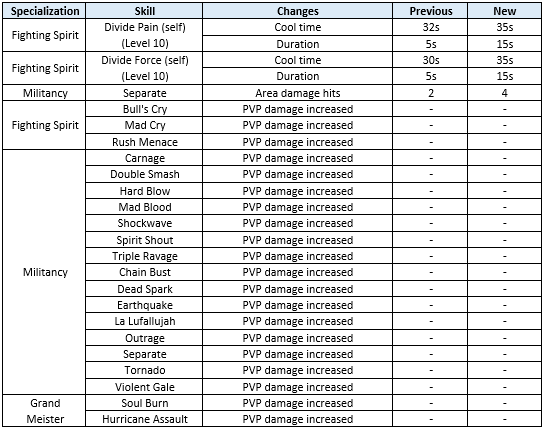 Azure Knights now receive a larger attack power boost from their offensive self-buff, Attack Acceleration. The buff’s duration and cool time have increased, and the Hit bonus is now a Vitality bonus.

Soul Blade strikes much more viciously than before, with hits increasing from 2 to 5.

Azure Knights have received roughly a 7% increase in PVP damage across most of their attack skills. 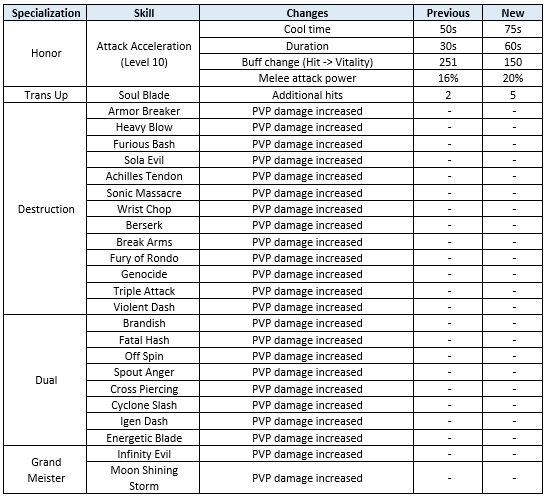 None of the Segita Hunter’s skill functionality has changed, but many of their skills now deal about 6% more PVP damage.

They are meant to be support characters and not damage-dealers, but the damage for the Segnale’s Doom Spiral has been greatly increased (nearly doubled), due to the heavy lifting it has to do for an unsupported Segnale.

For each class's attack skills, the skill's damage increases when the main stat (Str, Dex, Spirit) for the type of attack (melee, range, magic) is increased. Not all classes receive the same attack power payoff from main stat increases, however. To make sure that damage keeps pace between classes, and to boost the utility of main stat boosts and buffs (which are more common than other stats), main stat contribution to attack power is being increased for some classes.

In short, the three main stats now contribute more to damage, and classes with higher stat ratios will now see higher damage increases from main stats. The bigger the difference, the more benefit to damage a class will receive from this change.

Please note that the values on the following table are relative efficiency figures, and do not necessarily calculate directly into the attack power formula.

Amidst the barrage of mechanical changes, a new item has still found its way into the DShop this week.

Goo goo g’joob! The Fab Four Box is a bit of all right that’s not too dear. If you’re chessed off with random boxes, this one’s well worth your bob. And since we made a clanger and put five items into the “Fab Four” box, we’re going to give you the five finger discount and let you blag an extra, too. Pete says this offer is the Best.

Starmetal is our new wing box that was introduced last week. 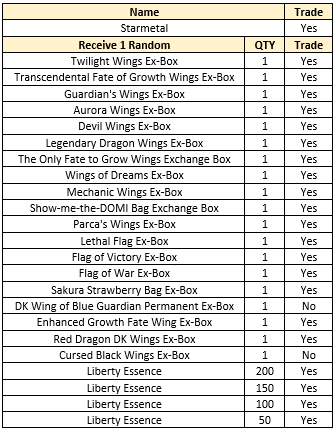 If you’re set for wings but have got a dire need to accessorize, the New Wings Socket Stone Lucky Box will give you one of several top-tier wing socket stones. 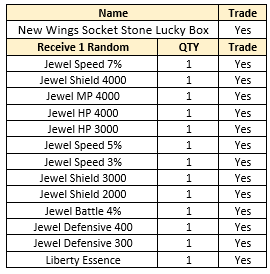 The New Type Arcadia Costume Ex-Box resembles a recoloured version of the wearer’s 184-188 armor set. It was apparently never released, which is probably why it was the first pick in the recent GM event we held where the first-place finishers were given a choice of costume (congrats to winners ExDee and Crukor!). This inspired us to make it available to everyone. 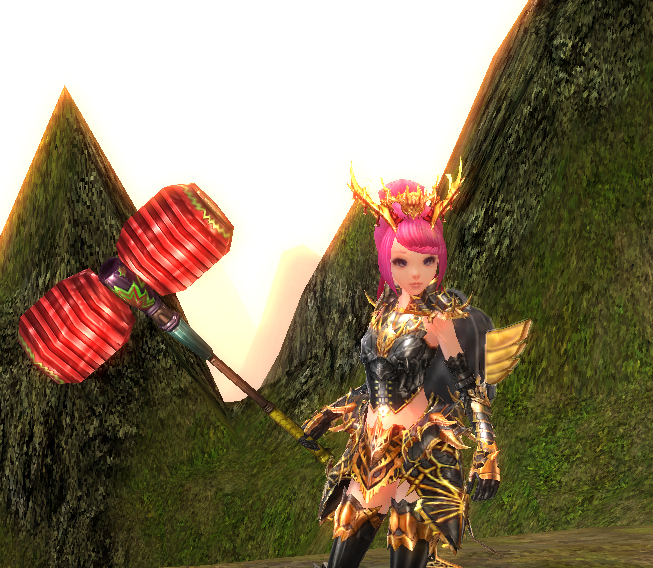 Got to be good looking / 'Cause he's so hard to see 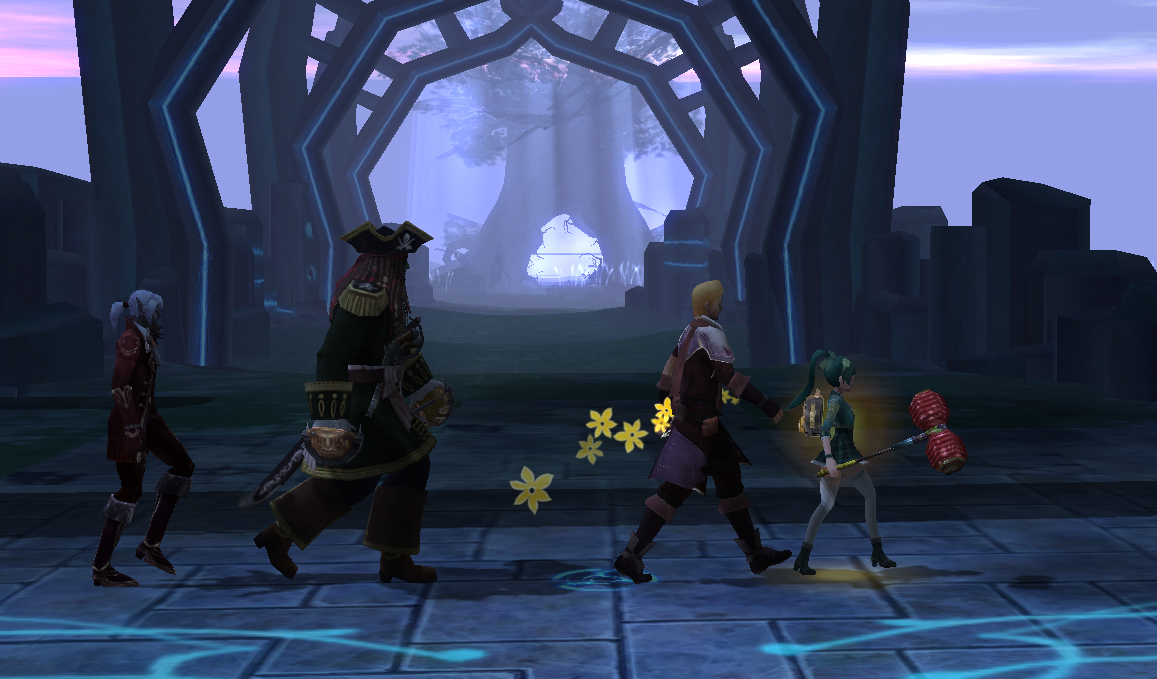 Once maintenance is complete, the experience level for both servers will be set to 300%, for the next 96 hours.

The text for the final stage of the Meister title selection quest has been cleaned up, to give a slightly better idea of each title's combat specialty, and to prevent misunderstandings. For example, Black Wizards are now prompted to choose between the Energy specialization to receive the Destroyer title, or the Darkness specialization to receive the Distrebyss title. No more confusion about what "Destroyer" means!